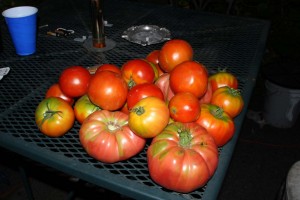 Harvested 27 tomatoes on 8/27 evening.  The Brandywines are huge with some tomatoes almost 2 pounds.  The harvest bucket felt like 20+ pounds.  The plants are producing heavily which may be why they’re dieing — they put everything they had into this harvest.  Each plant does have a lot of tomatoes so I shouldn’t be complaining about not getting a second harvest.  Have to give most of this away.  I don’t feel like canning and I still have the canned harvest from last year. 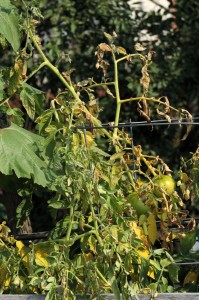 Late blight hit the Celebrities and Big Boys.  Not sure why this happened.  One theory is lack of nutrients.  I have been lax fertilizing as of late and I did not add compost to the mix this year or any slow release ferts.  Another theory is blame it on the sunflowers again.  They may be a vector and using them as buffer plants may have brought this on.  The two Branywines are unaffected and very healthy.  All tomato plants are producing a lot of tomatoes.  I probably should be measuring the harvest with a scale.  Maybe next year.  Despite the blight I would consider this year’s tomato crop to be a success in that it produced a decent amount of nice round tomatoes without BER or cracking or other weirdness.  I’m probably around 60-70 harvested so far.  A second wave harvest is doubtful.  The Brandywines have a shot at a second wave but I don’t see any new flowers on them either even though the plants themselves look good.  A couple Celebrities look kind of stunted.  In past years the Celebrities were the hardy ones — not this year.  Maybe Gethsemane in Rogers Park sold me bad tomato seedlings.  I have already decided not to use them next year because of their selection has been poor.  This seals the deal for me. 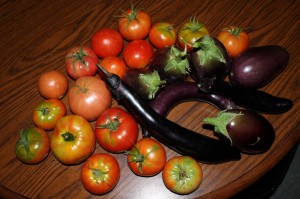 Harvest on 8/22.  Eggplants from fat eggplant in caged position 1 which is growing extremely well.  The tomatoes are producing without BER and will probably reach an average of 25/plant or 200 tomatoes total for the year.  This haul was 17 and today (8/25) there were 13 and they keep coming day after day.  Second wave harvest might be doubtful as some kind of blight is setting in.  More on this later.

No pics.  Celebrity tomatoes not doing well and dying on top.  Brandywines look very healthy but also have some brown leaves.  No mites.  This may be due to lack of nutrition since I didn’t add any compost into the mix this Spring and I’m behind on fertilizing.  Fat eggplant in caged position 14 is stunted due to sunflower.  Fat eggplant in caged position 1 is very big and healthy as well as its two habenero companions.  None of the 8 habs in NE corner will produce anything.  The sunflowers there look very nice however but they don’t play well with others.  Tomato harvest is coming in.  Second wave looks unlikely or maybe small due to flowers dieing even though there are tons of bees due to the sunflowers blooming.  We’ll see.  Maybe later I’ll post some harvest porn.  Until then….

BTW: It hasn’t rained since I can’t remember.  This might be considered a drought right now and watering is a PITA.

Note: Veranda north wall box was not being watered properly because I couldn’t see it.  Drip irrigation for these boxes is a must.  Soaker hose on alley level boxes somewhat work but is not a solution.  Those boxes need proper irrigation.  That is all…. 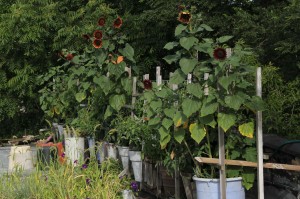 Here’s a shot of all 14 caged positions with sunflowers in bloom.  There are a lot of bees now and it looks like the tomatoes have a lot of flowers.  As mentioned before these sunflowers drink a lot of water and they don’t seem to make for good companion plants.  The habeneros shared with sunflowers are probably not going to produce anything.  Out of 12 habeneros planted I might see 4 plants produce anything.  Next year sunflowers will not be used as companion plants and will have to have their own container.