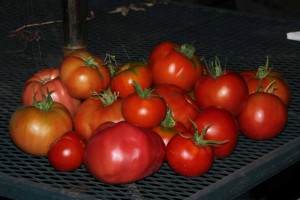 First tomato harvest happened yesterday.  Here’s a shot of first bucket of non-BER tomatoes pulled from the main roof.  I estimate this haul to be around 20lbs and I pulled another 20lbs today; all good looking round tomatoes.  Overall the crop looks to be a success but there doesn’t seem to be a second growth as all the plants seemed to have stopped growing.

The tomato in caged position 2 which shares a 9 cuft container with two skinny eggplants has almost completely died.  Its stalks are still green and has lots of green tomatoes so I’m hoping they ripen.  This plant tipped over in high winds because I was lax at installing  wooden supports to secure  metal hoops to something.  Once these tomatoes get to a certain size the metal hoops can keep the plant together in one piece but they can’t keep the plant from tipping over.  Although this tomato didn’t die immediately it is pretty much dead now.  I suspect a main trunk got ruptured and it took awhile for the full effect of the damage to be seen.  Since the stalks are green I’m hoping nutrients are still feeding the surviving tomato.   Since this tomato shared one of the newer large containers it had gotten very large so it’s a shame to have lost this one.

Also, 24 cuft of potting mix on veranda will be dumped into front parkway this fall to support fall wildflower seeding.  North wall planter will be eliminated as well as two 2x4x2 west wall sections.  The north pergola will be eliminated this fall to be replaced with a table — no plants.  I’ll try and get blueberries, grapes, or raspberry perennial bushes to grow in the remaining planters.  This should be easier to maintain. 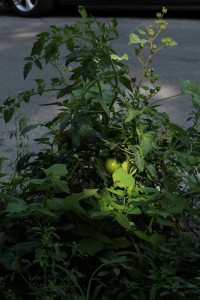 This tomato in front parkway grew wild from a seed and didn’t achieve seedling status until late June and now it’s falling over its hoop cage.

Update Main Roof Tomatoes:  No pics of main roof tomatoes but status needs to be updated.  Here is the current caged layout since I haven’t documented that yet for this year:

O = Other, T=Tomato, numbered left to right one to fifteen, west to east.

The above chart is important since there are some problems but overall the crop looks like they will produce.  BER tomatoes are still coming out.  Some small Celebrity tomatoes without BER harvested 4 days ago.

Next season all tomatoes will share a 9 cu.ft. container placing  same types together as they seem to grow better with their own kind.  Caged positions 1-4 will be moved to NE corner.main roof which will have 1 9 cu.ft. and 2 3 cu.ft. containers.  There might be some bacteria problem at the west end of the roof.  The skinny eggplant in caged position 1, sharing a 9 cu.ft. with T in caged position 2 is doing very well.  Eggplants never seem to have problems however.

All habeneros look big this year except the ones getting crowded out by their unruly container companion.  More on this later ….

Edit: Forgot to mention that the plant behind the tomato is zoom out shot of the weed mentioned in the previous article.  This plant never seemed to fully flower out even though it was always on the verge of blooming. 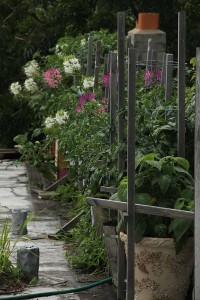 All 15 of tomato caged positions as of 7/17/2014. All tomatoes look good.  Tomatoes in the same type of container are bigger on western end of the row.  Cleome is once again used as a buffer plant placed between sets of tomatoes to attract bees.  The western end of the row gets the first shade of the day so I wonder if that has something to do with increased growth. 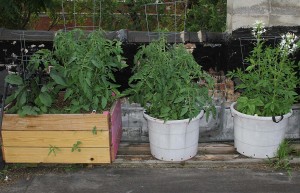 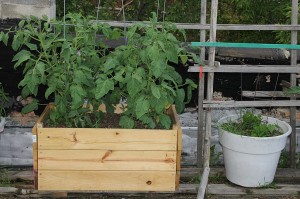 Here’s a brief update of tomatoes as of 6/27/2014.  All 8 tomatoes in caged positions healthy and we’ve had a lot of rain.  Fertilized once last week.  That might be kind of late.  Need to fertilize today.

The two wooden boxes are new planters that can hold two big plants.  They are 2x3x1.5=9 cubic feet.  The plastic tub planters are only 3 cu ft.  The two pictures show caged positions 1-7 of which there are 15 this season.  The wooden cage slots have not been installed and they may not be necessary.

No need for another harvest porn pic.  Should have gone up yesterday.  Picked about 20lbs and the squirrels got at least 5lbs (maybe more) — some ~2lb big Brandywines.  I left them on the vine too long.  The tomatoes are coming in too fast and I don’t feel like canning.  All plants are shot but I think they produced OK to somewhat heavy.  Not really sure.  Next year I want to build 4 new tomato planters at 2.5’x2’x1.5′ = 7.5 cu.ft.  This is 2.5x the current 3 cu.ft. planters.  If I do 4 planters that’s 4.5×4=18 cu.ft. of new mix which is 5 bags of pine bark plus a TBD amount of mushroom compost.  I think this will help the tomatoes last farther into September.  The neighbor’s in ground tomato plants look healthy and going strong even though mine appear to have more tomatoes.  There’s always next year.  Thankfully I can pull these soon and retire the main roof and quit watering early this year.