Note: There will be a lot of text observations because I need to record this data for future reference.

Temp in Bucktown got to 99 or 100F, it doesn’t matter which.  Everything watered last night so everything should be OK on main roof.  Need to do another complete watering tonight.  Temps forecast circa 100F for until Friday and perhaps beyond.  This climate is significantly different than the last three years at least by my off the top memory.

Todo: Try and download temperature data for the last decade.   Update on tomato health observation later this evening if there’s anything different.

Update Fri 7/6:  Rained 7/5 afternoon so did not have to water anything.  Another 100F today, all tomatoes showed leaf curl at 4:30pm so only watered them to hopefully cool their roots a little.  Maybe should have done that a few hours earlier.  Will water them again tonight.  Skipping fertilizing until heat wave is over on Sunday.

Update Sat 7/7: Heat wave broke today.  Temp currently 73F at 9:30pm.  Only got to mid 80s during day even though wunderground.com predicted 100F today.  They always seem to miss weather changes.  All tomatoes have leaf curl.  This could be bad news.  Containers still seem moist so skipped watering tonight.  Must checkup during day tomorrow.   Perhaps I watered too much — I don’t know anymore.

Rained somewhat the morning of 7/1.  Did not water evening 7/1.  Temp reached upper  90s 7/2 (today).  The tomatoes did not show wilt at 3pm.  I expected some wilt.  This could mean the containers are retaining more water this year.  Mushroom compost does impede drainage and was added this year to most containers.  I have to water everything this evening.

Update: I planted Big Boys not Better Boys as tomatoes.  After watering in the evening a Big Boy tomato in caged position 13 sufferred wilt and seemed to be the only one.  I suppose I should have watered at 3pm.  Overall the Big Boy plants seem larger than Celebrity tomatoes.  Some plants of both types have started to fruit.  I’m not sure what date this occurred in previous years.  Flowers look good on all tomato plants.

The vines might have suffered from lack of nourishment this year.  None of the boxes supporting morning glories were replenished with any kind of slow release ferts.  Next year, if there’s a next year, we’ll put at least 10% mushroom compost into the mix.  The alley planters cubic feet are: 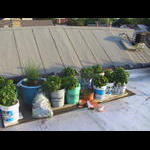