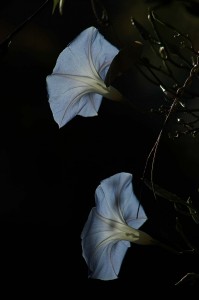 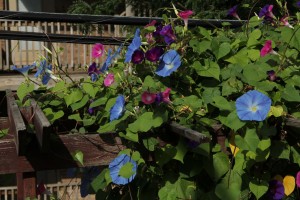 Heavenly Blue morning glories bloom on veranda level.  Veranda level MGs doing well.  Alley level; not so well.  I am considering eliminating alley level planters next Spring due to difficulty in maintenance (i.e. watering) and their lack of performance these last bunch of years.  The veranda level produced nice MGs this year for a change. 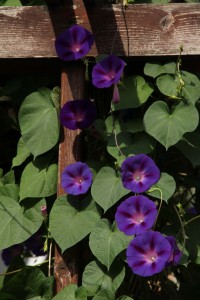 Purple morning glories bloom on veranda level.  Heavenly blues haven’t bloomed yet but I think I saw a bunch survive.  Not sure where they are now.  Haven’t seen any moonflowers yet.  Shot taken on 8/15/2013 in morning light.

Something is wrong with alley vines.  They aren’t growing and some of them look dead.  Not sure if it’s watering related or what.   From my finger tests it seems the soaker hose gets to the entire planter.  Nothing I can do but wait and see.  This year I let them grow on their own.  Maybe that’s a problem.  The soil might need to be regurgitated next spring — I don’t know.  Don’t really want to add another project to next Spring.  There could also be some dust in the air from the water project on Palmer that has drifted into their soil stunting their growth.  It’s a mystery now.  We’ll see how they are in a month when they should be at their peak.  The Veranda vines are doing very well and increasing the size of west wall boxes has helped.

The SE corner sunflowers had another drooping session on 7/28.  It wasn’t even that warm out and they ran out of water after I watered them the night before.  Watering is a big problem with these sunflowers in containers and I don’t think that 2’x4’x1.5′ = 12 cu.ft. is big enough to hold all those sunflowers (~12).  May need to look into going 2′ high on containers in the future.  The edge of the roof line can hold more weight since the weight the underlying beams can hold relates to its sheer strength which can be rather large.  Don’t want to overdo it however but I thing 2 cu. ft. / square foot roof area = 200 lbs can be supported by the current joists.  Harvested 4 Ichiban eggplants (the skinny ones).  Those plants look smaller than last year — most likely due to sharing space with a sunflower.  I didn’t expect these sunflowers to grow so big based upon what the seeds said on the package.

Tomatoes look OK.  Some Celebrities look a bit stunted.  First wave harvest still a couple weeks away.  The Brandywines and Big Boys look healthy.  Noticed a bunch of volunteer habeneros mixed into a couple of tomato plants.  Never had this happen before.  They are small because habenero seeds take a very long time to germinate.  All this potting mix moves around from year to year so eventually a hab seedling was bound to emerge.  Ironic since the purchased hab seedlngs have struggled this year, so much so that these little sprouts may actually produce more habs by the end of September.

Update 7/29: After checking the soaker hoses tonight I don’t think the far south planter is getting enough water.  The soaker hoses seem to be distributing water unevenly. 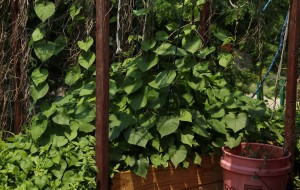 The center box on west wall veranda level is new this year.  It’s about 9 cu. ft. of root space.  This spot used to hold 2 3 cu. ft. containers.  Making one big container increased root space by 50%.  The vines are doing extremely well this year in general and this box in particular.  Much of this might have to do with the continuous wet and cool weather we have had this season so far.