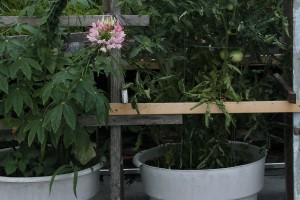 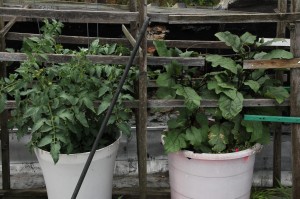 Caged position 2 (left) and 3 (right).  Celebrity tomato in position 2, two eggplants in position 3.  These eggplants are the largest so far of the 8 planted this year.

Update: I usually plant 3 eggplants in these 20 gallon tubs but only put 2 in this year.  From the looks of this container 3 would have been too crowded. 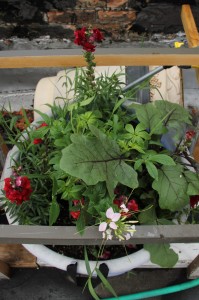 Caged position 14, the last caged position, contains 1 eggplant, 1 Cleome, and a bunch of volunteer snapdragons from last year.  This is an end container in the tomato line.  These three plants seem to be getting along OK so far however the Cleome looks a little stunted.  Some of the Cleome seedlings from Gesethemane were duds and I got no volunteer Cleome from the plants grown last season.  Eggplant grow like a weed on the rooftop and are heavy producers.

Update Note: Since this container contained volunteers from last year its soil was not turned thus mushroom compost was not added.  This could be an influence on plant size.