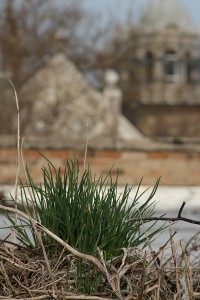 Chives start out strong in a debris clump.  Raspberries are sprouting in front parkway.  Started to dismantle alley planters today.  Dumped almost 8 cu. ft. in front parkway.  I decided not to build anything raised in that area — only by the stop sign.  More on that later …. 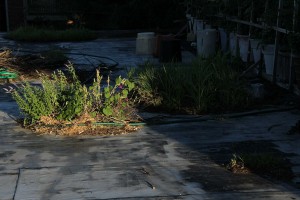 Here are a couple debris clumps taken in early morning light.  To the right in heavy shade are the 14 caged positions as they were last year, albeit with somewhat different buffer and companion plants.  We’ll get more into that later.  Due to the rain the debris clumps, clumps of old planter matter and mix have maintained their green.  Some have mint and chives growing.  If I see a tree I’ll pull it before the roots try and penetrate the rubber roofing.  For the most part the rest of the plants that grow in these are harmless.  I typically don’t water them nor do I seed them.  When dry they can be kicked around the roof like a hockey puck. 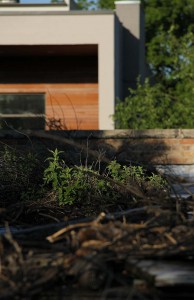 Pineapple mint has taken over and has set up beach heads in several debris clumps.  Debris clumps are gatherings of old discarded potting mix and plant carcasses left on the roof surface to support whatever it is that can grow in that environment.  These have been discussed here in previous years.  Last year these clumps didn’t fare too well due to drought conditions.  I typically do not water them nor do  I seed them.  Whatever grows in them happens by sheer accident.  More of these will be shown as the season progresses.  The building in the background is a new feature this year. 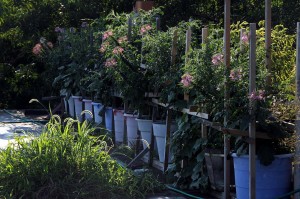 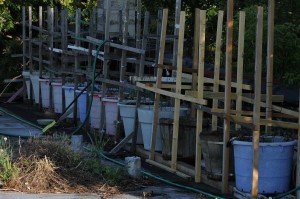 This photo shows the tomatoes at around 7:30 am on 6/3.  They’re still shaded nicely.  Sunrise is around 5:16am so they get over 2 1/2 hours of morning shade.  The south side of the roof gets no shade.  The debris clump in the sunlight is suffering from drought.  We’ll see how these fare this year under drought conditions.  I have identified two leaks in the roof that need repair — exact location not completely known.   I do not suspect the debris clumps however.  The tomato patch and two corners are the only things growing up there this year giving me room to do some roof repairs.  Much of the roof needs that silver paint.  I might look into white instead.

The following is for log book purposes.  The 14 caged positions have been planted with the following: