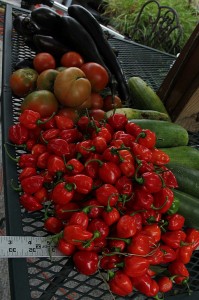 Tomato harvest resumed yesterday (after more than a week) and while up there I picked a bunch of habeneros, eggplants and cucumbers.  The tomato plants are waning.  They still have mites.  Hopefully next year I can thwart the mites before they establish a colony because once established they seem impossible to eliminate.  I estimate the second harvest to last a week or so with about 8 or 9 tomatoes per plant (65-75 total tomatoes).  There is no more growth in the plants so after this they’re done for the year.  I’m not complaining about the tomatoes this year.  The morning glory vines however …. more on that later.

Update 9/11:  Harvested 15 more decent sized tomatoes today.  There might be an average of 10 greens/plant left so projected harvest might be more than 80 until the end of season.  Habeneros also are coming in as well as 9 large cucumbers. 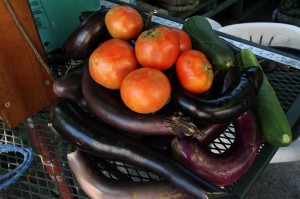 Here’s a pic of today’s harvest.  I picked a lot of eggplants because I have been lax at picking them the last couple of weeks.  Although I don’t have numerical data, it seems like I’m producing the same number of eggplants with 8 plants as in previous years with double that many planted.  This year I went from 3 to 2 eggplants per large container and a couple of singles that have gotten rather large.  Tomatoes are still doing OK which is far better than the situation last year. 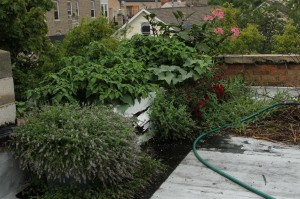 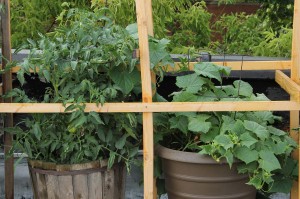 Caged position 11 (left) Celebrity tomato, position 12 is a cucumber from that guy in the Menards parking lot.  He usually has quality seedlings and this cucumber is doing well.