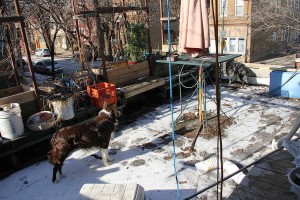 A new year growing season is upon us and here’s how the veranda looks at the end of January.  Not much snow.  There’s a roof leak at the drain on SW corners (far left) that will need to be solved this Spring.

The north wall (upper right) pergola and planters were torn down and will be replaced by a new and more useful structure.  I put that pergola up in 2004 and had planters sitting on the north wall.  Because these planters were only 1 foot wide nothing seemed to grow right in them.  There was some major contamination of the treated wood in the planter built only two years ago.  I suspect either bird poop or squirrel urine.

The new structure will house all indoor plants and will have a sun shade to keep direct sunlight from burning them.  It will be a 39″ x 86″ tabletop with a 6.5′ high cage  for plant  support and to keep them from blowing off the roof.  I’ll start on this as soon as we get nice days again — perhaps in March.  The just torn down pergola built in 2004 was started on March 17 — St. Patricks Day.  Time is going by fast.

Haven’t had a post here in awhile.  I did a lot of fall planting including two new trees in front parkway but I haven’t been motivated to photograph them or update this site.  Hopefully this will be a good gardening year.  I’m consolidating even more this year and maybe finally will try out a drip irrigation system as a test.  All green roof installations require drip irrigation because no one will want to keep them watered. 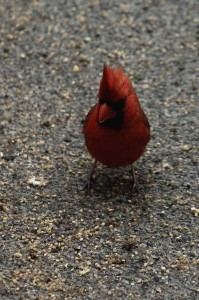 It’s still bird season but winding down.  Menards had 40 lb bags of bird food for $10 at clearance which means the birds should be able to forage for their own food soon.  I stocked up for next season.

There’s a family of Cardinals down the street and they stop by every now and then.  They can’t figure out how to fly onto the suspended bird feeder.  This little Cardinal is picking seeds from the ground like a common pigeon. 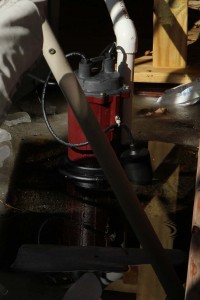 Luckily I had a new sump pump laying around  to pump water off the veranda.  The extremely cold winter froze the drain so water from melting ice is pooling and finding its way inside.  So far the pump works although it must be operated manually.  This wouldn’t have been necessary had I kept vigilant about keeping snow cleared on the veranda level.

It’s raining today and the pump has kept a lot of water from draining into the downstairs bedroom.  I suspect there is a small breach on a corner seam that pretty much stays dry being under an eave so the leak never became a problem.

Pretty soon I’ll start feeding the birds and I have quite a few new garden related construction projects planned.  I am eliminating all alley planters this year to maybe be rebuilt in 2015. 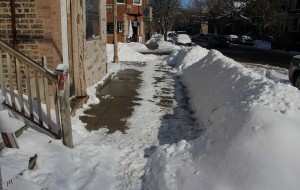 The wood from the alley planters will be reused into replacement planters for the main roof and front corner parkway. The front parkway will be a completely new planting this spring. More on this later. To the left is a pic taken right before the thaw.  The pile of shoveled snow is the new in ground parkway that will be planted with two new trees and the mature raspberry bushes that grew in a container for the last 4 years.  Hopefully the snow pile protected the raspberry roots so they’ll sprout in the next month or two. 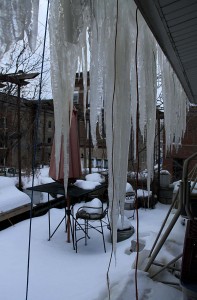 Icicles hang from eave on veranda level.  I have been a bit derelict with regard to shoveling snow off veranda level and now there is a slab of ice under the snow about a foot thick.  This shot taken the afternoon before the thaw on Sunday Feb 16, 2014.