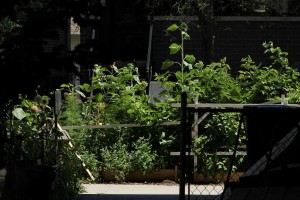 View of front parkway as you approach from the west on July 27.  As of today, 8/4, raspberries are done for the year as well as catnip.  Sunflowers are blooming out.  I pruned all raspberry branches that produced fruit per instructions since they will not produce next year.  This has thinned the bushes significantly which will allow branches for next year to become bigger and more established.  I plan not to prune them and tie them up so they start out growing straight up.  I’m hoping to get them to 10 feet or more and then arch over the sidewalk.  We’ll see how that works out next season.  Also the time lapse keeps snapping away pics,

In other news main roof tomatoes don’t look well but may produce some.  I would categorize this crop as a failure and it could be due to lack of fertilizing or too much rain in May and June or bad seedlings.  It seems the more expensive the seedlings are the worse they grow out.  Need to test this more next season.  I haven’t seen any mites however.

Since I haven’t documented this here are main roof cage positions.

There are only 8 compared to 15 in the last seasons.  This makes watering much easier but it’s still a chore.  P=peppers T=tomatoes and C=Cleome.  The peppers are various super hot variety that I’m growing on consignment.  Although they struggled they are all doing well on main roof.

Veranda peppers doing worse so I’m letting morning glory vines grow out.  So far the reduced veranda has been easy to water as well.  I haven’t taken any pics of veranda or main roof since nothing is very interesting.  Debris clumps on main roof need a writeup soon however. 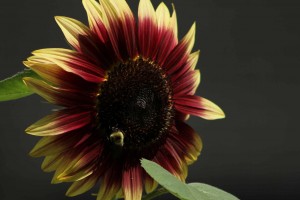 Chianti sunflower blooms on 7/27.  Been a bit behind on updating this log.  Lots of bees working the flowers in front parkway. 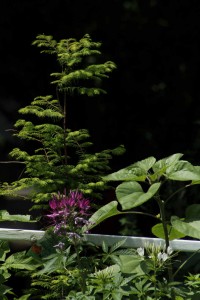 A Dawn Redwood grows amongst Cleome and sunflowers in the front parkway under mid day light.   I bought this tree for $10 at Aldis and it spent its first year as an inside plant.  Being a redwood I thought it couldn’t survive Chicago’s zone 5 climate but upon further reading the tag this wasn’t exactly like the redwoods you find around San Francisco but one that can survive our climate.  It is doing much better outside than it did inside.

According to the tag this tree can grow to 75 feet tall which will make for a nice replacement for the tree they chopped down to put in a stop sign. 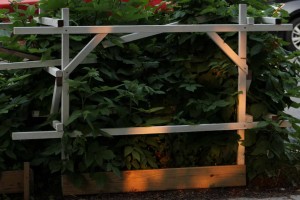 North front parkway raspberry cage in sunset light on July 3, 2015.  The sun is quite far to the north at this time of year.  This cage was built this Spring to support raspberry bushes.  It will be moved 2 feet north at the end of this season.  Two feet of raspberry bushes need to be cleared in that quadrant. 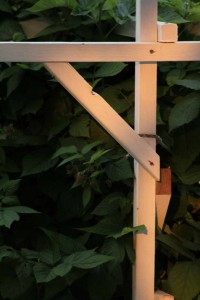 These cages keep the raspberry bushes growing straight up and not onto the sidewalk or street.  They use basic post and beam construction with 2x2s from 2x4s ripped in half and painted.  The beams all connect using single screws so angle braces must be used to maintain a proper square and support vertical and horizontal loads.  None of these cages are tied into the ground.

Haven’t updated this site in awhile and am behind on posting pics. I have been taking a timelapse of the front parkway since March 24 and put together a current cut for the Bucktown Garden Walk.