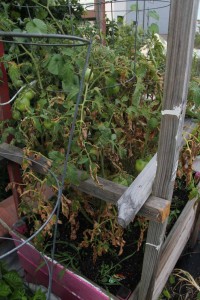 I need to get a better shot of this container.  Position 6 is in the foreground with 7 behind it.  Both are shriveling badly but 6 is producing more and 7 is almost gone although I did pull a perfect tomato from it today.  I chose to let the plants die on their own instead of pruning them because I don’t know what’s going on and don’t want to make things worse.

I suspect the best tomatoes, 2 and 6 are Celebrity and Big Boy which are generic tomato brands and have been grown on this roof before and known for their hardiness.  Positions 3 and 7 were some heirloom variety which may not be capable of surviving in a harsh environment.  This summer has been very cool and mild so they haven’t seen anything harsh like what previous crops have gone through.

Next season I’ll stick to two Celebrities and 2 another generic keeping the same kind in the same container and see what happens.  Need to get main roof overview.  It is quite reduced and more organized compared to last season.  I will keep the same configuration next season.