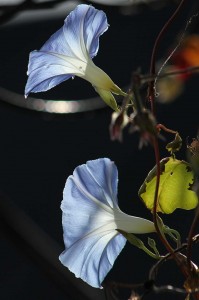 Heavenly blue morning glory in late afternoon light.  I had to seed these in order to get them to grow.  The morning glories look awful this year which is why there aren’t many pics of them up.  Although they were all planted in mushroom compost based potting mix, I don’t think that was the problem.  My theory is too many hot days above 90F (this year more than broke the all time record) which resulted in lack of watering.  Keeping up with the watering regime was brutal this year and I think that caused the MGs to thin out very early.  They even looked bad at the end of August which is when they should be in their prime.  The only way to fix this is to install drip irrigation.  This has to be installed next spring because watering this garden is too much by the end of summer.  I already gave up this year and am waiting for the first frost to kill everything and be done with it.

Update on tomatoes: I’m sick of watering and let the main roof go.  I think there are red tomatoes up there because squirrels have been throwing them off the roof onto the sidewalk below.  Not so interested in harvesting anymore.  Maybe I’ll get a bucket full of red habs and see if I can fill the dehydrator one last time this year.