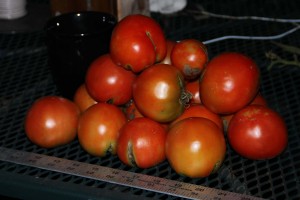 Today’s tomato harvest of 16, six of which came from a Celebrity in caged position 6. They’re all nice and round and no BER but they do have cracking on the stem side from overwatering. I waited 3 days since I last harvested so the average production is around 1/2 tomato per plant per day. Looking at the state of the plants this will continue for awhile. There is a second wave growth and more flowers. I found some mites on curled leaves and did some pruning. Some parts of the tomato plant are yellowing and wearing out from general age but there is lots of new growth. We’ll see how long this lasts. I’ll probably unload most of this haul onto the neighbors.

Update 8/23:  More mites seen more pruning but tomatoes are producing.  Pulled another haul as big as shown in the above picture today — maybe more.  Ended up giving all those tomatoes picked on 8/20 away and now am backed up again.  All the plants have second growth and lots of tomatoes are turning red.  I have the canning jars I just need the motivation to boil the water and follow the process.  I can however, no matter what happens from here on out, declare that the tomato crop has been successful.  I also think 8 plants are enough.  Celebrities are a keeper next year as they have always been, even in the worst of times, consistent and fighters to the end even when faced with death.  I am pondering whether to replace the Big Boys with Brandywines, the tomato with the pink fruit, for next year now that I know what has been killing them the last bunch of years.  I’ll think about this.  Still lots of time for next year and unlike the last bunch of years, I should be harvesting through September.