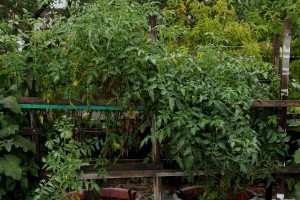 Caged positions 7 (left, Big Boy) and 8 (right, Celebrity).  Today was cool and rained all day giving the tomato plants cold showers.  Second growth on all plants seem strong.  As can be seen from this picture, the Big Boy in position 7 has had its lower branches either pruned by me or shriveled up by the spider mites.  The Celebrity on the right seems in much better shape albeit somewhat smaller.  Harvested four decent tomatoes yesterday and four today — some coming from Big Boys for the first time.  Tomatoes are somewhat cracked from overwatering but no BER.  BER hasn’t been a problem which is a first for me growing tomatoes on the main roof.  It appears (knock on wood) that there might be a second wave harvest this year which would be a first since (by my imperfect recollection) 2006.  The curled leaves are fewer.  I did, however, see single mites on some leaves but they were moving slowly and perhaps not reproducing fast enough to keep pace with the growth of the plants.  The hard water showers might be working.   Things are definitely looking good with respect to tomato plants and for the first time in many many years, I was able to give away tomatoes.  It’s possible that I may have to get out the canning gear as well (which is a lot of work).

Update 8/15:  Rained somewhat last night so skipped watering.  Checked mid day today and had to do an emergency water on main roof.  Temps got to 87F here.  Tomatoes took it well but the eggplants wilted quite a lot.  So far so good.  Second growth small set green tomatoes on mostly Celebrities but some Big Boys and lots of flowers for a third harvest.  Here is one of the tomatoes taken on 8/15/2011.