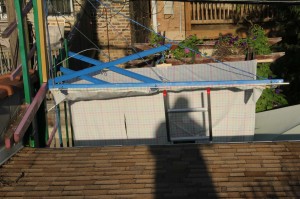 Overhead view of my new veranda shading system.  The blue structure uses suspension to support the weight of the shade.  In this picture the shade is completely upright.  It can be lowered as the sun moves across the sky.  This picture was taken in early morning light and notice the shadow cast by me and the shade.  The shade’s shadow goes onto the deck fence across the alley.  The last suspended structure I built here was based on squares which turned into parallelegrams over the years.  This structure is based on triangles which should be much more durable over time.   Holding a shading system is only one purpose for this structure.  Also, the shown shade is just a prototype using an old king sized sheet.  When all the kinks get worked out I plan on sewing something proper using nicer and perhaps more colorful fabrics.

Click here to see a pic of the old suspension project taken in 2005.

Update:  After furthur analysis apparently that shade on the deck fence across the alley is from the south parapit wall.  I put this pic up because it showed the angle of the sun at a certain time and at a certain date.  I’ll get a better picture that shows how the entire thing works up soon.

Update (8/13): Just have to mention for future Mark:  Mark took this picture because he thought the shade cast the shadow across the alley.  The purpose of being diligent taking pictures even when the light is rather harsh is to analyze these things further without the vagueness of memory.  Knowing how the sun rotates and casts shadows is an important architectural problem/solution that must be dealt with.