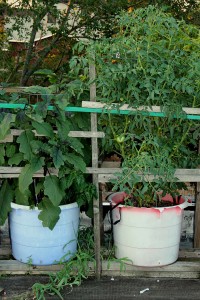 Caged position 7 (left) two eggplants and caged position 8 (right) Big Boy tomato.  For some reason, these two positions sitting right next to each other in the middle of the row represent the largest of their kind.  The two eggplants are the largest I have ever seen growing on this rooftop.  The Big Boy is the largest tomato so far but I had never grown this type before.  This Big Boy is the biggest of all four that have been planted in this row.  It is clear that three eggplants per 20 gallon container is too much.

Overall tomato status update:  Hard showers are a daily occurance for tomatoes, cukes, and eggplants.  After the second hard pruning I have not seen any mites even though some leaves are curled.  Pulled another stunted BER tomato from a Big Boy but it looked like a reject.  No BER on Celebrity so far (knock on wood).  Lots of green.  First real harvest should be sometime this week or next.  The tomatoes did a hard fail right after the first week of August last year (see archives).  So far so good this year.  Zeem application may not be necessary but having a bottle in storage might prove useful for later and certainly next year.