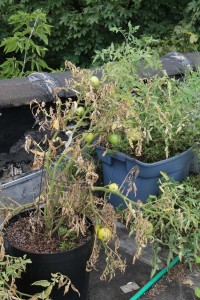 This is container #12, a Celebrity tomato planted in a smaller container as an experiment.  It was more or less healthy throughout the summer albeit a little smaller (most likely due to container size).  It caught blight from container #11 which supported another variety that struggled all summer and should have been pulled and replaced after the first week.  Celebrity tomatoes have been hardy as demonstrated with this plant.  Even though the bottom half is devastated by blight, it has second growth and may produce a second crop of tomatoes.  Celebrity tomatoes are a nice size too.  It is important to figure out what types of tomatoes can grow in a rooftop environment.  So far, Celebrity tomatoes top my list.  More on Early Girls and Brandywine, the other two main types planted later.